If you’re a fan of FPS games, you must probably be aware of the Far Cry franchise. Far Cry has been delivering action-packed First Person games since 2004. The latest installment of this super-hit gaming franchise has been garnering great positive responses from the gamers all around the world. Not only this is a FPS game, it also offers a stellar open-world gaming experience with extensive maps. Developed and designed by the famed gaming developer firms, Ubisoft, this game is a treat to the gamers. Continue reading this review to find out everything you should know about Far Cry 5.

The following are some of the prominent features that are being offered by Far Cry 5:

Far Cry games are infamously known for their unique and interesting backdrops, where each game has been placed in exotic places. Far Cry 5 takes place in a fictional Hope Country, Montana, United States. You play this game as a Sheriff’s deputy, who’s tasked against a Doomsday cult. Far Cry 5 features a total of 4 antagonists, among which Joseph Seed has gathered a huge fan base, thanks to his charismatic personality. The player has to stop the Doomsday cult, which is wreaking havoc at Eden’s Gate. 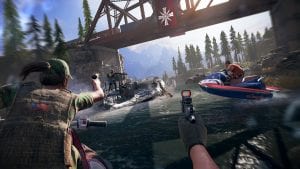 As with any other Far Cry game, this installment is no different when it comes to the game’s introduction. Far Cry 5 begins with an escape, which leads to a whole different level of chaos and mayhem. In this game, the player along with the local Resistance members should stop the Cult before it destroys everything around. You get to access an extensive collection of weapons, explosives, and vehicles. Furthermore, you can also tame animals to assist you in combat. The AI of Far Cry is relatively smart and highly agile, which makes it all more difficult for you to challenge the antagonists. Far Cry 5 features advanced takedown skills, for which the franchise is famous for.  Extensive open-world maps, heavy weapons, stunning scenery, wide-range of animals, and vehicles make Far Cry 5 gameplay exciting and thrilling.

Ubisoft is highly popular for the visuals and amazing graphics they embed in their games. Far Cry 5 takes it a whole different level, when it comes to graphics. Usually, developing high-end graphics for open-world games is a daunting task, which takes a lot of effort and time. But the Ubisoft hasn’t compromised a bit, while developing stunning graphics for Far Cry 5. The modern America in this game has been visually represented in a great manner, which makes you want to visit the area. Each and every detail has been designed with utmost care, as many experts have praised this game as one of the most-realistic graphical games around.

Far Cry 5 is a modern open-world First Person Shooter game with high-end graphics. This game requires a great deal of system resources for you to play it smooth. Far Cry 5 demands a minimum system requirement range of Radeon R9 270 Video Card, 2GB Graphic Card, Core i5 Processor, 3.5 GHz CPU speed, 8 GB RAM, and Windows 7 OS. Note that these are the minimum system requirements to run Far Cry 5. If you’ve got a system configuration of better components, you would enjoy this game with a greater experience.

Far Cry games are being enjoyed by tons of gamers for a long time. These games are initially released for PC, but soon started making them compatible with multiple platforms. The developers of Ubisoft wanted to make this game available for different platforms, which is why they’ve released Far Cry 5 for Xbox One, PlayStation 4, and Microsoft.

Although Far Cry 5 is an amazing game, which has been labeled as one of the best PC games released in recent times, we still need to consider the pros and cons of this game. Here’s a look at this aspect:

The Verdict of the Game

Far Cry 5 is a great game for the franchise fans, but you can also play this game and enjoy it to the core even if you haven’t played any Far Cry game. For someone who loves playing First Person Shooter games which are featured in an open-world environment, Far Cry 5 is a treat. Realistic and enthralling graphics of this game makes it much more exciting to play and enjoy this game. Download this game here and start your fight against the Cult to save the world.